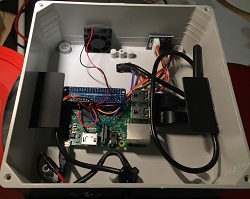 A year or so after I completed the original SkyCam project, the Raspberry Pi stopped working. I believe this was caused by the high temperatures within the dome. I set about redesigning the original SkyCam, to overcome some of its failings and introducing a few other improvements. The first design change was to include project box below the dome, into which I placed a cooling fan. By moving the Raspberry Pi into the project box I could help prevent the Pi from being exposed to temperatures of over 60C on hot Summer days.

The Raspberry Pi camera used in the original project was limited to exposures of 6s. I found this to be too much of a restriction for an all sky camera, so for this project I decided to use a ZWO ASI120MC instead. This can achieve much longer exposures, and also produced less camera noise. Having said that, the noise on exposures longer than 10s is still very noticeable so I added a dark frame option. I wrote the web interface to be quite user friendly as I considered making these available to others in the future. So, the dark frame creation can be carried out from the web interface. Once exposures longer than 2s are taken, the dark frames are automatically subtracted from images. The auto-exposure routine I designed for the original SkyCam was also improved to cater for exposures up to 30s. Although I designed the project to capture exposures during the hours of darkness, exposures taken during the daytime are correctly exposed.

I was concerned that the Sun might damage the camera sensor during the daytime, so I added a motorised shutter to this project. The shutter is automatically opened once darkness begins, and then closed as sunrise. The temperature graphing from the original project was enhanced and added to this project. The ASI120MC includes a built in temperature gauge which I added in to the graphs as a means of gauging the dome temperature.

One of the issues I discovered through initial testing was the presence of moisture within the dome. To help reduce the image obscuring effect of this moisture I added silica gel packs inside the dome, but unfortunately it helped very little. I then added a ring of resistors around the base inside the dome. A python script running on the Pi monitors the external temperature and triggers a relay if the temperature falls below an adjustable set point. This increases the temperature within the dome by over 10C, and required a more capable power supply since I use a single supply to power the project.

Major improvements were made to the web interface, including the addition of an ad-hoc wireless for initial configuration and options for configuring all of the various SkyCam variables and wireless settings. My plan was to make the project suitable for selling in the future, and certainly the interface itself is ready for that eventuality.

Most importantly, the project worked well photographing the night sky as intended. The temperature graphs were also very useful, and in fact remain so. The Pi has been running for over two years without failing and temperature graphing is still working well. Unfortunately the ASI120MC camera failed after about one year of use, and this is almost certainly due to the temperature within the dome. I should have placed the camera body within the project box with just the lens protruding through to the dome. If I build another version of the camera, that will be a requirement.

Finally, here is an image taken while the camera was working.