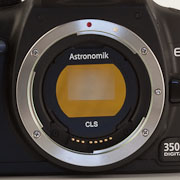 After speaking with several members of my local astronomy club and reading numerous reviews on the Internet it seems the majority of amateur astronomers agree that light pollution filters are essential if imaging from locations that suffer from light pollution. I live in a moderately sized town in the south of England so I'm no stranger to murky orange glows in the night sky. It was never too much of an issue when I used to observe visually, but in an attempt to get off to a good start with astrophotography using my Canon 350D I decided to purchase a light pollution filter. I chose the Astronomik CLS filter, mainly because I found several good reviews and because it is the same filter used by other members of my astronomy club and I have been impressed with their images.

I like to carry out fairly methodical tests of any new equipment and the CLS filter was no exception. I decided to capture a 60s exposure of M42 both with and without the CLS filter installed in the camera. On the left is the image taken without the filter, while the image to the right of this is taken through the filter (click the images to open a larger version in a new window). Both images are RAW mode images that have not had any processing applied. It is immediately obvious that the CLS filter blocks a significant amount of the signal, but there is also an increase in contrast as a result of the darker background.

At first I felt the trade off was acceptable until I realised the effect the CLS filter had on the colour balance. When I demosaiced the image taken through the filter I realised there was a very pronounced blue colour cast to the image. You can see this for yourself in the image third from the left. I was shocked at just how much of a problem this presented at first. Even Mars appeared blue through the filter! I have since learnt to improve my processing skills in Photoshop and this helps resolve most of the effects of the colour balance problem, but I've come to the conclusion that the Canon 350D is simply not picking up the yellow/orange/red light sufficiently through the CLS filter to offset the blue colour cast. 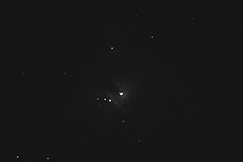 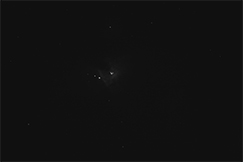 I decided to carry out a further test to determine the extent of the problem. It's not easy judging the colour of astronomical targets so I decided to use something more 'down to earth' instead. I found a rather handy colour palette image on the Internet which I displayed on my computer screen. You can see this image over on the left. With the CLS filter inside my camera I then took an image of the screen. The resultant RAW image acquired was then demosaiced and you can see the result on the right. Notice the very pronounced blue hue, and the extremely weak reds and yellows.

At this point I began to wonder whether I really needed to use the CLS filter at all. So, the next clear night I proceeded to take a 10 minute exposure of M101 without the CLS filter and a 20 minute exposure with the CLS filter. It was necessary to increase the exposure with the CLS filter to counteract the decreased signal. On the left you can see the demosaiced, unprocessed result without the filter and on the right is the equivalent result with the filter. The murky orange colour is caused by light pollution and clearly demonstrates why these filters are needed. The image taken through the filter has significantly more contrast but before we draw any conclusions it is worth checking the end result after post processing.

I took a total of 5x 10 minute exposures of M101 without the CLS filter, stacked and processed them. The result can be seen below on the left. I then took 9x 20 minute exposures of M101 with the filter and repeated the stacking and processing. The result of this process is shown in the image below on the right. It's true that this isn't strictly a fair test given the difference in the number of subs. However, I was surprised that there doesn't seem to be as big a difference as I was expecting. I prefer the image taken through the filter, but I feel I at least have the option of not using it and should be able to achieve reasonable results. 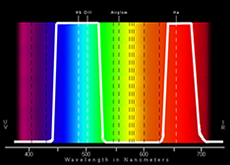 After the practical tests I decided to look at this from a technical perspective. The graph on the right shows the transmission curve for the Astronomik CLS filter and it's immediately obvious that almost all the yellow, orange and a little of the red is blocked. These are the wavelengths where there is a significant level of urban light sources in operation. Looking at the curve you would expect there to still be plenty of red signal present, but this doesn't reflect my colour palette test results. So what is the cause of the difference? Unfortunately the CLS filter is not the only filter blocking light entering the camera. My Canon 350D has not been modified so it has the stock Canon IR/UV filter in front of the sensor. I found the transmission response for this IR/UV filter and I have superimposed this information on top of the CLS filter graph. The Canon IR/UV filter transmission response is shown in black on the image over on the left. 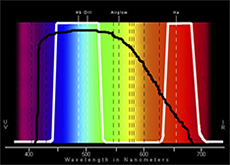 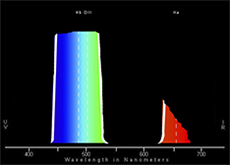 The light reaching the sensor will in fact be reduced by both filters, so to get an approximate idea of the wavelengths that will still reach the sensor I have created a new graph which you can find over on the right. From this image it is immediately clear why my colour palette test had such a weak response to the red part of the spectrum. I believe the solution will be to replace the Canon 350D stock IR/UV filter with the Baader ACF filter. This will enable sensitivity to red wavelengths, including the important Hydrogen Alpha (Ha) line.

I do believe the Astronomik filter is useful, though if used with an unmodified camera it will make colour balancing somewhat difficult. If you're more experienced than me with post processing then this may not be so much of an issue, but I would advise you to consider reviewing other filters available. I feel that the Astronomik CLS filter blocks a good deal of the spectrum perhaps unnecessarily and there may be better options available, albeit more expensive.